Wild flowers of the garrigue – end of March

Visiting three spots around Feuilla (two on limestone and one on acid soil) we managed to clock up a very decent  range of species and all felt we learned a lot from Gill’s knowledge and expertise. Flowers of the garrigue are never very showy or obvious, and at first glimpse it would be easy to miss the abundant and colourful, though discreet, wild flowers!

We started our first wild flower day trip with an easy walk on a limestone plateau to the south of Feuilla, discussing the various definitions of the word “garrigue“… of which there are several! We highly recommend the account given in the preface to the book “La Garrigue Grandeur Nature“, which is a must if you want to find out about the flora and fauna of this Mediterranean habitat.

As we set off on a gentle wander, we were instantly greeted by good numbers of the delightful multi-coloured Dwarf irises (Iris lutescens), including one which didn’t seem to be able to decided if it wanted to be blue or white! Whether blue, white or yellow these are all one species and are common in areas of open, dry pasture or garrigue. Wild tulips (Tulipa australis) were struggling to open due to the slightly chill wind, but their red and yellow buds are just as attractive as the flowers! The Jonquils (Narcissus juncifolius – from their rush-like leaves) were also dotted around everywhere. Here too, we saw our first Woodcock orchid of the day and one or two Giant orchids (Himantoglossum robertianum) well past their best – and never very tall around here, despite their name. We also saw Spurge olive (Cneorum tricoccon), Mediterranean buckthorn (Rhamnus altnernus), Prickly juniper (Juniperus oxycedrus) and Saint Lucie’s cherry (Prunus mahaleb), which are all part of the classic garrigue vegetation. The latter being the host plant for the caterpillars of the Giant peacock moth, which should be hatching from their overwintering chrysalis any time now! The Rosemary (Salvia rosamarinus) was resplendent, providing a lavender-coloured haze to the entire area and the Wild thyme (Thymus vulgaris) also in flower (though much more discreet!).

A “button” or “window” of acid soil with different plants

Our second spot took us up onto a hill behind Feuilla known as the Serre de Bruyère (or Heather hill) – a geologically interesting emergence of much older rock than the surrounding limestone, known as a “button” or “window”. Some of the vegetation is common to both alkaline and acid soils, such as the three species of oak present: Kermes, Holm and Pubescent, as well as the rosemary and thyme. Other plants we saw are only found on acid soil, such as the Tree heather (Erica arborea), French lavender (Lavandula stoechas) and the Montpellier or Narrow-leaved cistus (Cistus monspeliensis). We also saw Butcher’s broom (Ruscus aculeatus) and two orchids Sword-leaved helleborine (Cephalentera longifolia) and the stunningly unusual Violet Limodore or Violet bird’s-nest orchid (Limodorum arbortivum) which cannot feed itself and depends on a parasitic relationship with fungi. Seedlings develop very slowly, remaining entirely below ground for 8–10 years before flowering.

Time for a picnic lunch and a comfort stop at the Birding Languedoc HQ – La Rassada. After lunch, we had a good look in a nearby field, where there were good numbers of Early spider orchid (Ophrys sphegodes) in flower and Lady orchid (Orchis purpurea) just coming into flower.

Then it was off to our final spot of the day, another limestone plateau very similar to the one we visited first thing – and very close – but interestingly with some additional species, including the Rock stork’s bill (Erodium foetidum) – which features as NT (near threatened) on the IUCN red list but which is locally common – and Tuberous valerian (Valeriana tuberosa). Seeing what we initially thought were Narbonne Star-of-Bethlehem coming into flower, we then realised it was too early and they were in fact the very similar St Bernard’s lily (Anthericum liliago). We added to our list of orchids, seeing good numbers of Sombre or dark bee orchids (Ophrys forestieri) together with more Woodcock orchids and rosettes that may well be Lizard orchids to flower later in the season. And we were able to compare the Prickly juniper with the Phoenician juniper, which gradually loses its young prickly leaves to become more “cypress” looking. 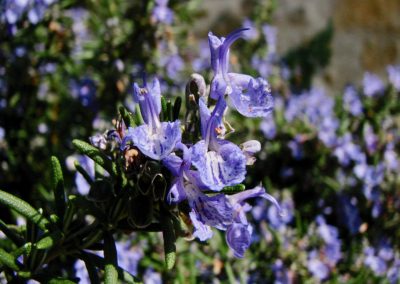 At Birding Languedoc we have often been asked if we offer day trips with a focus on the local flora… So now we do!

There are over 3,000 species of wild flowers (including over 80 species of orchid) in this part of France, so there is plenty to see. We are proposing two day trips, both with the goal of seeing many of the spring flowering annuals, perennials, bulbs and orchids that are found here.

These day trips will be a relaxed exploration of the local flora guided by Gill Pound – an experienced amateur botanist and former proprietor of La Petite Pépinière de Caunes; assisted by Philippa Benson – founder of Birding Languedoc and also an interested amateur botanist. Neither of us are professionals but both of us have lived here long enough to have acquired a good working knowledge of the local flora!

The flowering season for each plant can vary widely from year to year, so there are no guarantees of any particular wild flowers. However, given the habitats and timing of our two day trips we will no doubt see a good range of orchids and cistus as well as hopefully, Wild tulips and Dwarf iris, various wild narcissi, Apyllanthes monspeliensis, Asphodels and much more!