Early spring birding in the Languedoc

Summary: A great day’s birding with a total of 59 species including Great spotted cuckoo, Iberian shrike and Short-toed eagle

Another chilly start, but the day began well with a good number of species seen from the car park. These included Corn bunting, Black redstart and plenty of Chaffinch resting over on migration. The soundscape was provided by Serin, Corn bunting and Sardinian warbler for most of the day. Everyone also got excellent views of a Short-toed eagle gliding directly overhead as it migrated north. Who knows it may even have been on its way to Italy… Research indicates that many of the Italian breeding population of Short-toed eagle use the Western Mediterranean Flyway, crossing into Africa via the straights of Gibraltar, rather than taking the much shorter route via Sicily to Tunisia. Thus avoiding the larger stretch of water they have to cross. You can read more about this research here.

Crossing to the eastern side of the D13, we wanted to bird this area in morning light as well as afternoon light. The scrubby fallow land dotted with trees and shrubs, near the ruined Cistercian grange of Fontcalvy, is a well known spot for both Great spotted cuckoo and Iberian grey shrike and sure enough Karline found us both species quite quickly. The shrike were clearly showing the pinkish breast/belly and were perching nicely for us on various trees, bushes and vine trellising, allowing everyone really good views. The two GSCs were not quite so cooperative, playing hide and seek in an almond tree at the corner of the vineyard below us, but also on occasion sitting out in good view, their noisy call making them easier to follow. On migration from this spot, we saw Black kite, a couple of Crag martin and plenty more Chaffinch. Crested lark and a very smart Stonechat in the vineyard and a Reed bunting in the reeds were good finds too, as was a Skylark singing overhead and a Meadow pipit in the distance.

We all heard a Hoopoe…

Back across on the western side of the D13 the habitats were slightly different, with open pasture, more vineyards and some chalky cliffs. One attraction of this spot is normally the small natural pond, where we have seen Black-tailed godwit in the past. It was sadly reduced to no more than a muddy patch, but there were however, two White stork feeding on its margins with a Great white egret nearby. The same or another Short-toed eagle was also seen. In addition we managed to add Woodlark to the list. We all heard a Hoopoe calling in the distance, but after a bit of a search decided it was in vain. So our first Hoopoe of the season remained a “heard” only!
Back to the cars to eat our picnic and over the lunch break we saw a harrier, which some identified as a Hen harrier. Karline explained however that the brown on the bird’s back indicated that this was in fact a male Marsh harrier, showing us the difference in the book. Always good to pick up tips in the field, and one of the main reasons we have a guide! We also saw a group of large birds flying north west at fairly high altitude in a V formation (in fact there were two formations) and again with Karline’s help we were able to identify these as Cranes (many of us having assumed they were White stork as we see far more White stork than Cranes migrating along the Western Mediterranean Flyway).
After lunch we made our way back to our Iberian grey shrike spot but they weren’t around. And whilst there were plenty of Magpies around the GSCs were also hiding after lunch. We went for a look around the beautiful ruins of the Fontcalvy Cistercian grain store that once belonged to the Abbey at Fontfroide. And whilst the Jackdaws were there in large numbers, and a local Kestrel too, we couldn’t find the Little owl that has often been spotted at this site. An Ocellated lizard was seen however, which put a smile on Karline’s face! We then headed off to look for Stone curlew, and successfully found a single individual in a sprouting crop field. We were all able to get a really good view both in our bins and through the scope before it wandered off into a vineyard (yes, they are everywhere!). A little further on, we got excellent views of a female/juvenile Hen harrier with a clear white band across its rump (too early for Montagu’s). 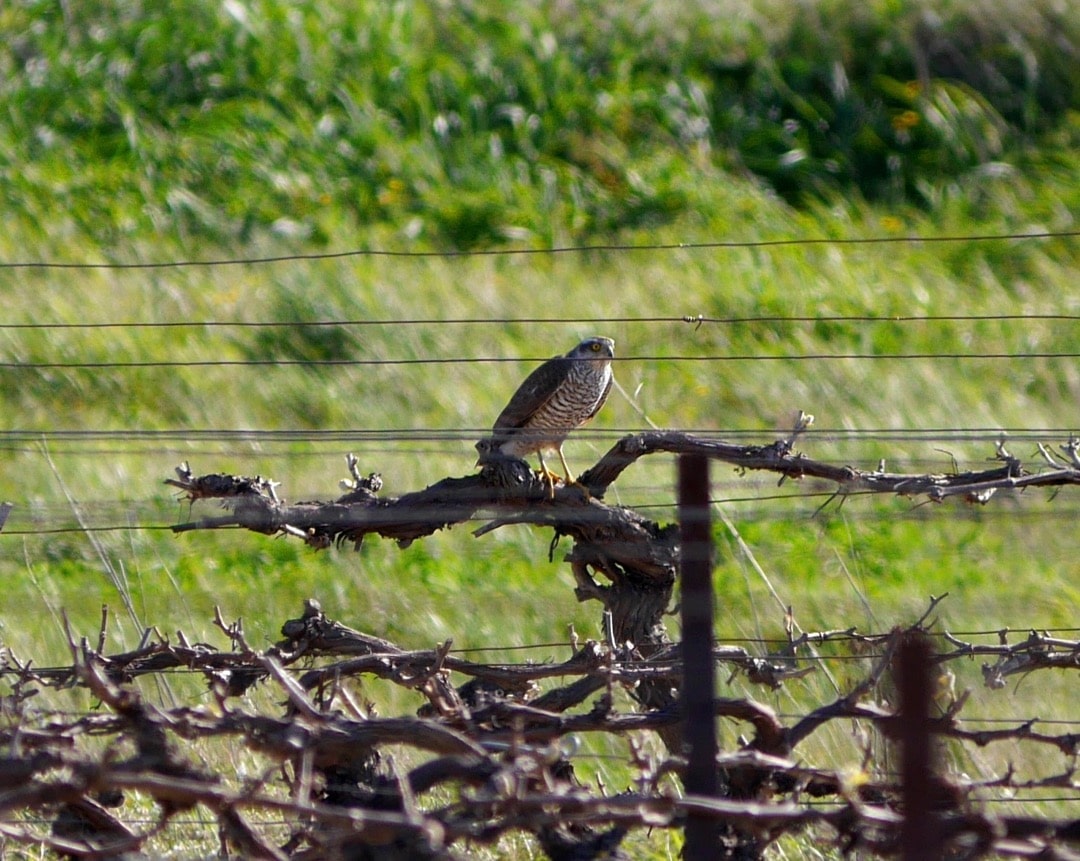 As we headed off to end the day with a scan of the Capestang marsh, we passed a farmer ploughing his vines, being followed by a couple of Rooks (which are not common at all around these parts!), plenty of Jackdaws and a group of Cattle egrets – quite an eclectic mix! There was also quite a group of White wagtail – probably stopping over on migration. Also on our way to Montels we saw a Sparrowhawk using one of the vine posts as a perch.

The Capestang marshes or étang (which give Cap d’estang its name) are made up of a floodable area covering 1,374 hectares, of which 76 % are in the Hérault county and  24 % in the Aude. It is part of the wetland area of the Lower Aude Valley and acts as a flood retention area for the river Aude.  We were able to add a good number of species here and particularly enjoyed watching a group of about 25 Glossy ibis fly over. A Barn swallow and Black kite were spotted on migration, whereas resident and summer nesting species included good numbers of  Marsh harrier (male and female), plenty of Coot, a pair of displaying Great crested grebe, some Little grebe, the odd Flamingo and a Grey heronry. Shoveler (leaving soon) and Red-crested Pochard (recent arrival) were nice to see too. The Cormorant were using power pylons as a drying rack.

Back to the cars via a quick stop to look at an Ocellated lizard sunning itself on a wall (spotted earlier by Karline). Another great day’s birding! The impressive and interesting bird list came to a grand total of 59 species, the variety of which reflected both the diversity of habitats we had birded during the day and the time of year, with migration really starting to kick-in.

Thanks to all to took part and we look forward to seeing you on future trips when we are all allowed out and about again!