The Great spotted cuckoo is slightly larger than the common Cuckoo, but looks much larger with its broad wings and long narrow tail. Dark above, with small white spots and pale below. Crown and ear-coverts silvery grey.  Sexes are similar. The juveniles have blackish upperparts and cap, and chestnut primary wing feathers. The great spotted cuckoo has a magpie-like flight.

It’s a bird of warm open country with trees near vineyards. It feeds on insects, spiders, small reptiles and hairy caterpillars, which are distasteful to many birds. Most of the time a Magpie nest is chosen to raise their young. Unlike the common Cuckoo the Great spotted cuckoo’s hatched chick does not evict the host’s eggs, but young Magpies have little chance of survival because of the food competition.

Great spotted cuckoos are fortunately quite noisy and are often heard before they are seen! Look out for Magpies in February and March in open scrubby country with a few small trees and you may well find a GSC!

The Great spotted cuckoo call is a loud cher-cher-kri-kri and variations.

When to find the Great spotted cuckoo in the Languedoc

Below you can see the average numbers of Great spotted cuckoo observed in the Languedoc. 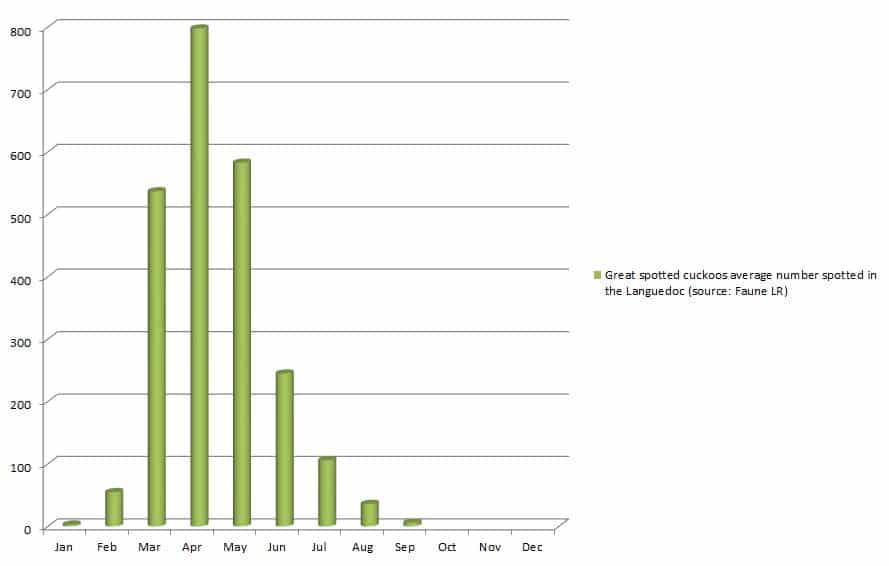 The Great spotted Cuckoo is a protected species on the IUCN red list. The population trend in Europe appears to be stable, and so the species is not listed as vulnerable under the population trend criterion (>30% decline over ten years or three generations).

According to the  IUCN:

Hunting and traffic accidents are the main causes of mortality in southern Europe. In Crete it is preyed upon by Eleonora’s Falcon (Falco eleonorae)