Although the European Bee-eater is an incredibly colourful bird you will often hear them before you see them, despite their exotic appearance! Their call is a welcome sign that summer is well on its way in the Languedoc. In early April Bee-eaters arrive from Africa to breed in Southern Europe. They have chestnut brown and golden yellow upper parts, the underparts are turquoise with a yellow throat, whilst the wings are green and the longish beak is black. These stunning birds can reach a length of 26–30 cm, including the noticeably elongated central tail feathers. Both sexes have the same plumage although females have slightly greener feathers on the shoulder (more gold coloured on the males).

Bee-eaters are often seen in small groups in trees, bushes and on overhead wires. Their preferred habitat is warm, dry, open country with scattered trees and shrubs. The less dense areas of Languedoc garrigue seem to suit them well. As their name suggests, they feed on bees, wasps, butterflies, dragonflies, hornets, cicadas and other insects. They catch their prey in flight and can eat up to 250 bees a day.

Nesting begins in early May, as Bee-eaters tunnel longish burrows into a sandy bank, preferably near a river or stream. They then lay 4 to 10 eggs in early June. Bee-eaters are colony breeders, and mostly monogamous. Their easily recognisable call is a distinctive, mellow, liquid and burry prreee or prruup, reminding some people of an old fashioned British telephone! Such an evocative sound, it has many of us Languedoc birders rushing outside to spot them as these beautiful birds fly over in groups of 20-40.

Click on the right arrow below to listen to their call…

The best time to see European Bee-eaters in the Languedoc 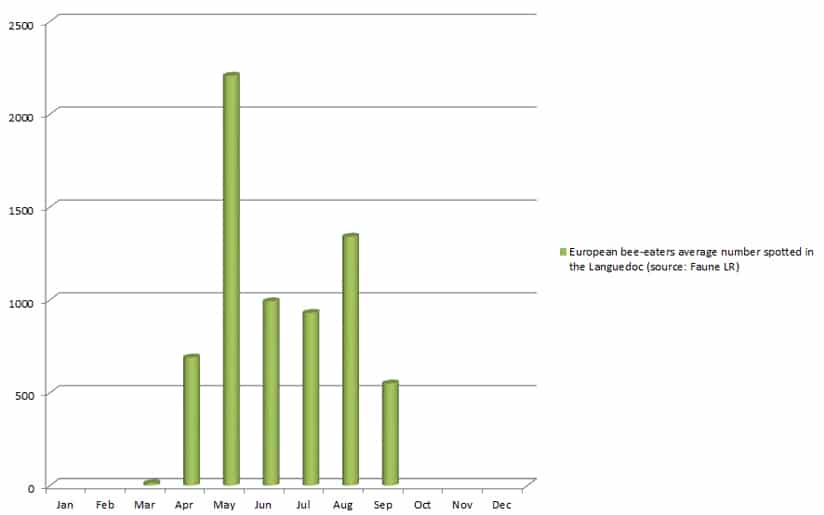 Population trends of the European Bee-eater

The European Bee-eater is a protected bird species. The numbers in Europe are stable and estimated to number 2,800,000-5,050,000 breeding pairs.

In the long term, greater threats are likely to be depression of insect faunas by the wide scale application of pesticides on the breeding and wintering grounds, increases in large-scale crop monoculture, the canalization of rivers resulting in the loss of riverbank nesting sites, and the development of wilderness land, according to the IUCN. (International Union for Conservation of Nature)