The European roller is a summer visitor to the Languedoc. In early April the first Rollers arrive from East and South west Africa. Slightly smaller than the Eurasian jay, this stocky bird is mainly a bright turquoise blue with indigo leading wing edge and rump, an orange-brown back, large head and a strong black bill with a tiny hook at the tip.

Rollers often perch in trees, on posts in the vineyards or on overhead wires, like giant shrikes. It’s a bird of warm, dry, open country with scattered trees and feeds on large insects, rodents, snakes, small reptiles and frogs. They are watch-and-wait hunters with a slow but powerful flight and a call that is quite like that of a Jackdaw.

Nesting usually in a tree-hole, they breed from May to July and lay 4-6 eggs. They are not colony breeders, being monogamous, but do sometimes breed in a semi-colony with a number of nests in the same area.

The best time to see European roller in the Languedoc

Below you can see the average numbers of European rollers observed in the Languedoc. 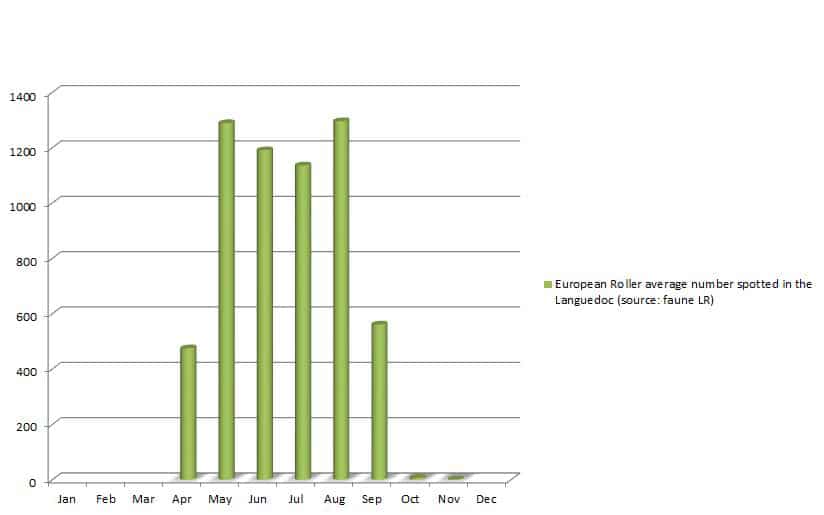 Population trends for the European roller

The European Roller is a protected species on the IUCN red list. The numbers in Europe are in decline due to hunting, pesticides and loss of habitat.

They are however, like most bird species, very opportunistic and in the Narbonne area have made the most of some nesting boxes originally installed to help encourage a population of reintroduced Lesser kestrel!

According to the  IUCN:

Some southern European populations have also declined: in the past century, the species has gone extinct in Germany, Denmark, Sweden (Snow & Perrins, 1998) and Finland (Avilés et al. 1999), possibly due to habitat loss as a result of agricultural intensification (Snow & Perrins 1998). (International Union for Conservation of Nature)